The return of the heroes to their homeland 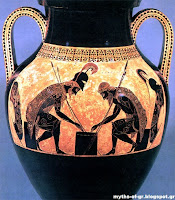 The gods were angered by the destruction of the temples and the general insults that the Achaeans commited. While the fleet was returning ,near Tinos broke an intense storm . In one version , Nauplios,in order to avenge misled their  fleet by sending wrong signals with the mirror from the cape of Kafirea Evia ( Cavodoro ) having as result to sink many ships.
Nestor , who was the most pious and moral character in the campaign , he had safe and quick return to home. The Ajax Locri was punished by Athena , while Athena borrowed a thunderbolt of Zeus and fired him up.

The Teucer , son of Telamon and half-brother of Ajax, stood trial for not preventing the death of his brother and was forbidden to return home .Finaly he never returned and founded Salamis of Cyprus. Later the Athenians claimed that  as Teucrus left,  handed over the authority,to the sons of Theseus.


Neoptolemos followed the advice of Helenos and both took the land tract,to their return home. During the trip he met Odysseus in the land of Kikonon , and bury the teacher of Achilles, Phoenix.
Then he ended up to the land of Molossos,Epirus and had a son with Andromache , Molossos, who became his successor in the region. For this later kings of Epirus , and Alexander the Great claimed to be descendants of Achilles . 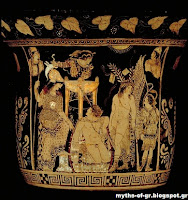 Diomedes after a storm ended up in Lycia , there the king Likos(wolf) wanted to sacrifice him to Ares , but the king's daughter Callirhoe took pity on him and helped him to escape. Then he got in Attica, where the Athenians not knowing that he was their ally,attacked him. Finally  Diomedes arrived at Argos, where he discovered that his wife Aegialeia, was committing adultery .Outraged he,left for Aetolia. According to some sources he passed through the southern Italy, where he founded a number of cities .
Philoctetes emigrated to Sicily, where he founded a number of cities between Croton and Thurii . After military conflicts with the local populations founded the temple of Apollo where he dedicated the bow of Hercules .
According to Homer , Idomeneus reached secure in his native, Crete . In another version, the ship sailed into a heavy storm and Idomeneus promised Poseidon that will sacrifice the first person to be seen at home if he would return home unharmed . The first person he saw , however, was his son , whom he sacrificed .          Eventually the gods were enraged and pestilence broke out in Crete, and the people sent him to exile in Calabria in Italy from where he subsequently ended to Colophon in Asia Minor, where he died.
Than their less eminent Achaeans very few reached their homelands.
Tweet