Hercules in Greek mythology (in the ancient Hellenic "Heracles") was an ancient mythical hero, regarded as the greatest of the Greek heroes. Born in Thebes,was the son of Zeus and Alcmene (means "strength"), a descendant of Perseus.
His mother Alcmene was married to king of Thebes,Amphitryon with whom fled to Thebes because Amphitryon had accidentally murdered Ilektryona (father of Alcmene and son of Perseus). Zeus took the form of Amphitryon and slept with Alcmene. Even before the birth of Hercules, Zeus announced to the gods that, a descendant of Perseus will be born by Alcmene ,who will reign on the throne of blinds.

When Hercules was born, Hera, wife of Zeus, which was jealous for his infidelities, he sent in his crib two snakes, but the infant strangled the snakes.

Names of Hercules in Greek mythology

His names are as various as his functions. In his youth, i.e. in Thebes, where the story of his youth is laid, he was called also Alcaeus (' the strong '), from which is derived his epithet Alcides. His principal name, which is probably of Argive origin, it has not yet been possible to explain with certainty. The second part, cules, belongs, like the fuller form /cXetros, to /cAeo? ('fame');but whether or not the first part is connected with Hera,, the protecting goddess of Argos, who imposed upon him his labors, cannot be positively decided.While he was worshiped especially by the Boeotians,Dorians, and Thessalians (as, indeed, it was with the Boeotians that all hero worship in its full development appeared first), yet from the earliest times in Athens, Marathon, and Leontini, he enjoyed divine honors as Alexikakos (' defender from evil '), and Kallinikos (' glorious victor ').

In later times he was regarded as the chief representative of the wrestling art and therefore also as the founder of the Olympian games ; and his statue appeared everywhere in the gymnasiums and adjacent baths, so that he became by such association the god of all warm baths and other healing waters or springs. On account of his clearing the highways of enemies, he appears also as the god that escorts travelers (Hegemonies). He is often attended by his protectress Athena, more rarely also by Hermes and Apollo.He was hated by Hera, just as were all the sons of Zeus borned from other wives. Therefore, since Zeus had decreed the dominion over Argos to the next descendant of Perseus who should be born, Hera delayed the birth of Hercules until his cousin Eurystheus had seen the light of day in Mycenae, and had thus become ruler of Argos, and liege lord of Hercules. Evidently, however, Tiryns was regarded as the birthplace of Hercules ; for the distant Thebes, though spoken of in the Iliad as his home, never can have stood in such a dependent relation to Mycenae
as would be implied by the legend just mentioned.

While yet in his cradle Hercules strangled two serpents
which Hera had dispatched against him. After he had slain with the lyre his teacher Linus, who had chastised him, Amphitryon sent him to tend flocks upon Mount Cithaeron, where he killed a powerful lion. When his father had fallen in battle against the Orchomenians,Creon, the last of the Sparta, became king of Thebes, and to Hercules was given his daughter Megara as a wife.In a fit of madness, which Hera decreed upon him, he killed his three children with bow and arrows. On his recovery he was compelled in expiation of his crime to enter the service of Eurystheus, who laid upon him a series of difficult labors, the order of which varies in different versions of the myth. The collection of legends describing these labors forms the connecting link between the Theban-Boeotian and the Argive-Dorian Hercules myths. The latter of these two series of myths seems to embrace the labors in their oldest form.According to this version Hercules had his abode in Tiryns, south of Mycenae, to which, indeed, the story of his birth points. He fought at Tiryns, as he had done on Cithaeron, with a powerful lion, which lived on Mount Apesas, between Nemea and Mycenae. After this he wore the skin of this lion, flung over the upper part of his body, as a characteristic dress. Accompanied by his friend and charioteer, lolaus, he went against the Hydra, a nine-headed water serpent in the marshy springs of Lerna, south of Argos. In place of every one of the monster's heads that was struck off
two new ones grew, until lolaus set the neighboring woods on fire and burned out the wounds (i.e. dried up the springs). The last immortal head Hercules covered it with a block of stone. Then he moistened the tips of his arrows with the venom of the monster.From Mount Erymanthus in Arcadia, from whose snow-covered summit a wild mountain stream of the same name rushes down, a wild boar (a symbol of this stream) was laying waste the fields of Psophis. Hercules pursued him up into the glaciers, and brought him in chains to Eurystheus, who in terror hid in a cask. On Mount Pholoe, which is near Erymanthus, he lodged with the Centaur Fholus, who was named after the mountain and was a counterpart of Chiron, who dwelt on the Thessalian Pelion. As Hercules was being there regaled with the wine which belonged to all the Centaurs in common, he fell into a quarrel with them, and finally killed most of them with his arrows. Pholus and Chiron perished also by carelessly wounding themselves with some of the arrows. Then, after Hercules, still operating in Arcadia, had caught the hind of Cerynea and  driven out the storm birds whose nests were
the lake of Stymphalus, birds that shot out their feathers like arrows, his native land of Argolis was insured against all dangers.The scenes of the following expeditions were farther away.  Upon an Elean local legend rests the story of the cleansing of the stables of king Augeas (< the beaming one ?), of Elis. Though three thousand cattle had been kept there, the cleansing must be completed in a single day. This feat, according to the tradition, Hercules accomplished by conducting the river Menios (' moon river ') through the place. But upon a metope of the temple of Olympian Zeus, the only extant representation in art of this adventure, he is represented as using a long broom. Augeas promised Hercules for his labor a tenth part of his herds, but did not keep his word ;wherefore he and all his champions were afterwards slain by Hercules after a stubborn resistance. 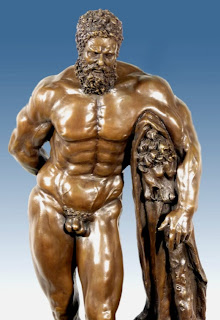 As part of his labors, Hercules killed the Nemean lion, killed the Hydra, rapidly caught the deer Kyrenia killed Erymanthio Boar, cleaning the stables of Augeas, killed the Stymphalian Laying, caught the wild bull of Crete, stole wild horses of Diomedes, took her belt Hippolyta, brought oxen of Geryon to Eurystheus, grabbed the apples of the Hesperides, and finally brought Cerberus from Hades.
Apart from their labors, Hercules held and other mythical feats.
He took part in the expedition of the Argonauts and liberated Isioni, daughter of the Trojan king Laomedon, from a sea monster. Not, however, continued to the end the campaign.
In Libya defeated the giant Antaeus, son of Poseidon and Gaia, who was very strong, because taking power by tapping into the Earth, the body of his mother. Hercules, understanding what was his strength, lifted him in the air with mighty arms and smothered him without difficulty.
After this feat, Hercules, tired, went to sleep. Then the pygmies, a people dwarf the chained and nailed to the earth. When Hercules awoke, jumped up and grabbing them in the handful, wrap them all in the pelt of the Nemean lion wearing.

Hercules catches the deer Kyrenia. Attic black-figure amphora ca 530-520 BC
Heracles freed even Prometheus, whom Zeus had tied the Caucasus to punish him because he gave the people the secret of fire.
He brought Alcestis from Hades, having fought with the Grim Reaper and freed her. The Alcestis was the wife of the king of Feres Admitou, which, to save her husband, was to die instead of him. Heracles happened to pass in those days the bears went to visit his friend the king. Learning the great calamity that had found the palace, ran, and anticipating the Grim Reaper, fought with him and brought to life again the beautiful Alcestis.
Hercules killed, even to lift people from tyranny, the bloodthirsty tyrant of Egypt Vousiri.
Theseus freed from prison Molossian king of Epirus.
The last feat of Hercules was killing the centaur Nessus, who tried to steal the hero's woman, the beautiful Deianeira.