The siege of Troy

The Siege of Troy 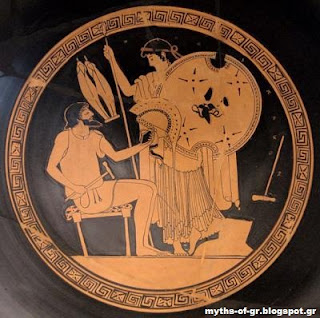 Calchas predicted that the first Achaean who would set foot in the Trojan land will be the first casualty of thewar. Thus even Achilles hesitated to attempt it. Odysseus from his ship, threw his shield on the shore and jumped over on his shield.He was followed by Protessilaos, the leader of Thessaly guard who stepped first on the Trojan land. Achilles landed second and killed the Swan, son of Poseidon. The Trojans finally forced to retreat behind their walls. Protessilaos killed many Trojans but finally killed by Hector (or other sources say he got killed by Agate and the other by Euphorvos). The Achaean bury their first dead with great prices in Thrace, across the Hellespont. After the death of Protesilaos, his brother, Podarkis took part in the war, thus replenishing the loss.

The Greeks besieged Troy for ten years. The more information was saved the last year of the war, with the result we have less information  for the first nine years of the war. After the initial landing and their consolidation in the coastal zone of Troy they began to plunder the countryside, conquering adjacent to Troy ally towns, even loot the opposite Thracian coast. Troy did not get a combined mass siege and as the ninth year in business and communication with the mainland of Asia continued undisturbed. On their side the Greeks accepted significant military aid even before the war ended. However they failed to penetrate the hinterland and to surround the Trojans, who kept contact even with their allies on the European shore.

The campaigns of Achilles 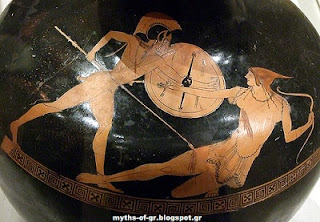 Achilles was the most active of the Achaean hero. According to Homer, captured 11 cities and 12 islands. According to Apollodorus pillaged the country of Aeneas in the Troad region and stole his cattle. Also occupied the Lyrnisso, the Pidasso, Lesvos, Colophon Clazomenai and many other neighboring cities, also killed the minor Troilus, son of Priam. There was oracle said that if Troilos reached 20, Troy would not fall ever. John Kakridis Homeric analyst, says that the list of achievements is wrongly vastly extensive, south of Troy.
Among the spoils of looting were the priestesses Briseis, from Lyrnisso and Cressida, from Ippoplakies Thebes, which was offered to Agamemnon. Achilles captured Lycaon and, one of the sons of Priam. Patroclus sold him later as a slave in Lemnos, but bought him the Aetion of Imbros and returned to Troy. Eventually killed by Achilles 12 days after the death of Patroclus.


The death of Palamedes

Odysseus sometime sent to Thrace to bring wheat, but returned empty-handed. This provoked the contempt of Palamedes , who took his own initiative and was finally able to provide the Achaean army with large quantities of wheat.
Odysseus always watched him suspiciously Palamides especially since he had put his son's life in danger. Organized a whole plot to be blamed unjustly : he wrote a fake letter,supposedly Priam to Palamedes , and buried gold near Palamedes tent. The letter and gold , by the plan of Odysseus discovered by the Achaeans and Agamemnon ordered the death by stoning as the evidence for the alleged betrayal seemed irrefutable .
The father of Palamedes , Nafplio, when learned the news rushed to Troy and demanded the justice to be done , though he was not listened . As revenge , he traveled to all the palaces of the Achaean kings, and spread their wives that their husbands had already contracted relationships with concubines Trojan women , in order to make them official wives when they return to their homeland . Many queens believing Nauplios broke their ties with the most typical case of Clytemnestra , wife of Agamemnon , contracted an affair with Aegisthus , son of Thyestes . Exception was Penelope , which remained faithful to Odysseus.


Apostasy of the Greek soldiers

When approaching the end of the ninth year, the army of the Greeks, exhausted by the long conflict and the lack of supplies, refused to obey the orders of their leaders and demanded to return home. In "Cyprus", Achilles forced the soldiers to stay. According to Apollodorus, to solve the problem of supply, Agamemnon brought growers of vineyards the daughters of Anios (granddaughters of Apollo), which magically produced wine, olives and wheat with just a touch.

The war ended with a special trick. Odysseus devised to build a large -size replica hollow wooden horse , the Trojan Horse . The horse was an animal sacred to the Trojans believed would we moved as a talisman , inside their city after they had prepared all the conditions that would give the impression that the Greeks left permanently. Was made by engineer Epios,under the guidance of Athena and abroad bore the inscription:
" Dedicated to Athena by the Greeks to return home " 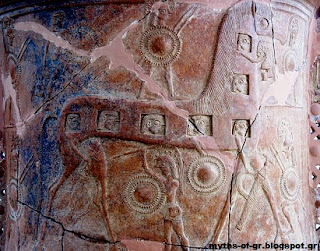 In the Trojan Horse stepped in an Achaean group led by Odysseus, while the rest of the army burned the camp so the Trojans believe that the Greeks left forever , and sailed for Tenedos .
The next morning, the Trojans discovered that the rival camp was abandoned . In their enthusiasm, believed that the ten-year war has ended and felt it necessary to move the Trojan Horse in the inner city . Some individual Trojans considered it as damned and that must throw it off the cliff or burn it.

Priam's daughter Cassandra and the priest of Poseidon Laokoon warned that the horse  would bring only disaster to the city.  But while Cassandra had clairvoyance, from Apollo to anticipate events,also had the curse because she broke her promise to be given to him,so she was not able to persuade anyone. In particular Laocoon and his two sons were attacked by huge sea snakes which drowned them in the sea. Aeneas and his followers believing these predictions retreated to Mount Ida. The Trojans finally full of enthusiasm decided to transfer  the Trojan Horse within the walls of the city. Indeed, because it was quite large manufacturers were forced to demolish a portion of the main gate of the city, the "Sky Gate." Immediately after the went to the streets to celebrate the successful outcome of the war. At midnight,Sinon, an Achaean spy, signaled the Achaean fleet at Tenedos to approach, at the same time the soldiers in the Trojan Horse came out and killed the guards.

The Fall of Troy

The Greeks entered the city and killed its population while they were sleeping in their homes . The massacre continued the next day. Any Trojans anticipated , fought desperate with great stubbornness , although found startled , disorganized and without a leader to guide them . Some defenders hurled pieces of the roofs of their houses on the damaged  streets of the city to prevent the intruders . Finally , the last defenders were lost in the whirlwind of destruction and massacres .

Neoptolemus killed Priam who had fled as suppliant in the temple of Zeus. Menelaus killed Diifovo , the husband of Helen and moved to kill Helen but once he saw her beauty he lowered his sword and forgave her infidelity.
The Ajax Lokrian raped Cassandra in the temple of Athena. Because of this hubris decided by the Achaeans , with the encouragement of Odysseus, to stone him to death , but he fled to the sanctuary of Athena and saved.
Antenor, who had hosted Menelaus and Odysseus when they had sent an embassy to ask Helen, was not altered neither he nor his family. The Trojan Aeneas took his helpless father in the back and fled. According to Apollodorus, was allowed to leave because of his moral character.
The Greeks razed the city and divided the spoils. Cassandra was given to Agamemnon, Andromache to Neoptolemus and Hecuba Odysseus.
The Greeks threw Astyanax, the infant child of Hector from the city walls in order to prevent possible revenge when he came of age. Also sacrificed Polyxena on the grave of Achilles as demanded by oracles.
The Aethra, Theseus' mother had come to Troy with Helen, old anymore, was saved by her  grandsons, Demophon and Akamas.

The prophecy about the war

At the end of the tenth year, an oracle said that Troy will fall only with the bow of Hercules, which was in the possession of Philoctetes who was on Lemnos. For this purpose Odysseus and Diomedes brought him in Troas, in between whose wound had healed . During the upcoming clashes Philoctetes killed Paris with this arc.
According to Apollodorus, Helenus and Diifovos asked the hand of Helen. Diifovos eventually prevailed and Helenus retired to Mount Ida. Calchas knew that Helenus knew about the coming destruction of Troy, so Odysseus chased and captured him. Eventually forced after interrogation to confess that the Greeks would win only if they brought the remains of Pelops, as they did.