The Labors of Hercules 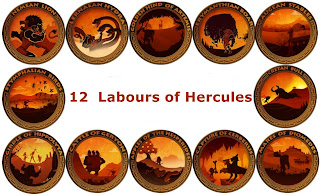 As Labors of Hercules in Greek mythology have been recorded  twelve feats that had to make the legendary hero Hercules, in order to purify himself for the murder of his children, which he had committed when he got mad by Hera. For this purpose, Hercules went to the Oracle of Delphi where they told him that, he had to serve for twelve years Eurystheus, king of Tiryns and perform feats he would commanded him. His exploits eventually made were:
His first feat was to kill the fearsome lion of Nemea, which was deserted throughout the state.
The second achievement was the destruction of Hydra, a monster with nine heads lived in Lake Lerna  and was a woe to the inhabitants of the region. The position of each head that cut Hercules conjured two more, and so he had when he cut one head burned with fire the cut. After he killed the beast plunged in the blood his shuttles and made them fatal.
Third feat was one where he caught the rapid deer Kyrenia with bronze legs and golden horns and gave it alive,to Eurystheus.
Four killed Erymanthio boar, which ravaged and brought panic in the region of Arcadia.
Fifth,he clean the stables of Augeas, the rich king with 3,000 steers from the manure that had gathered there the last thirty years. Hercules refined them turning the waters of the Peneus and Alpheus(rivers) to the stables, and they provoke the manure.
Sixth,killed with his darts the Stymphalian Hens,which  were man-predatory birds with bronze beaks, claws and wings, and flew like darts.
Seventh, caught the wild bull of Crete which made disasters throughout the island, and took him alive to Eurystheus, who was scared and let him free.
Eighth labor of Hercules was to grab the wild horses of Diomedes. He was king of Bistonians in Thrace, son of Ares, who harbored wild horses with human flesh.Hercules killed Diomedes and  took his horses,domesticated them and  took them to Eurystheus. The king of Mycenae left them free to Olympus, where they were devoured by wild beasts.
After that feat of Hercules, the daughter of Eurystheus, Admetus, asked him to get her the carrying belt of Hippolyta, Queen of the Amazons, and Eurystheus ordered Hercules to perform the desire of his daughter. Hercules, after many adventures, he found the hostile people of Amazons and tried to take the belt of their queen. These, however, faced him so wild with so much momentum and  refused to give him what he wanted,so Hercules had to kill Hippolyta and get the belt.
Then Eurystheus commanded him to bring the oxen of Geryon,which was guarding by the Orthros a fearsome dog. Geryon was a giant with three bodies and three heads who lived on an island on the western edge of the ocean. After many difficulties and after he fought with the waves to reach the island,Hercules killed Geryon and his dog Orthos. This was the tenth feat.
The eleventh feat was to seize the apples of the Hesperides. The Hesperides were nymphs who lived in the garden of the gods who were ordered to guard the golden apples that were there, and who had given by the "Earth" to the marriage of Zeus and Hera. Along with these daughters of Night,guard of the garden was also the terrible dragon Ladon, and Atlas who lifted the sky. The garden of the gods was the most western border of the earth, where heaven and earth come together on an island across the ocean or near Libya, on a mountain of Africa. Hercules took the apples with the help of Atlas, after he briefly lifted the load of the heavens on his shoulders,gave time to Atlas to steal the apples from the garden of the Hesperides .
Finally, the twelfth feat of Hercules was to descend to Hades and drive up to the earth and lead to Eurystheus the three-headed dog Cerberus, who was the son of Typhon and Echidna, its brothers were Orthos the two-headed dog of Geryon, and the Hydra and he was the guardian at the gates of the Underworld.
Hercules with these twelve exploits freed from the domination of Eurystheus and then turned around the world helping the weak.