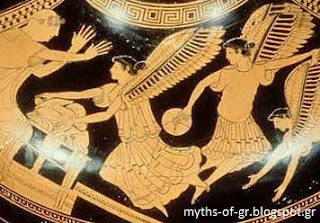 In Greek mythology, the Harpies were female monsters, daughters Thafmanta and sea nymph Electra and sisters of Iris, messenger of the gods. This collective name derives from the word rapture - Snatcher - rifle, . Attributed to personifications of stormy wind. As Harpies, Homer mentions only one, namely the Podargi (= Whippet), which he considers the mother of horses of Achilles, and Hesiod mentions two: Aello and Okypeti, which later added the Celaeno. Apart from these mentioned other names such as: Aellopous, Nikothoi, Okythoi, Okypodi etc. These monsters were in the form of bird head woman and unlike their sister Iris were considered messengers of Hades.

The Harpies were associated particularly with the gods of the winds Zephyrus and Boreas. Homer (Iliad II 148 ff, T 400) states that by the  union of Podargis and Zephyrus were born the famous for their speed horses of Achilles, Xanthos and Wallis and horses of Dioscuri, Flogeas(=flames) and Arpagos(=grabs).
The Harpies snatched children and souls of people. For this reason they were depicted upon the graves to hold by their nails the soul of the dead.
Apollonius Rhodius in the Argonautica (2, 178 ff) describes the Harpies as punishers of Phineas in Bithynia of Thrace. The seer Phineus had been blinded by Zeus because he was revealing his intentions to people, and also Zeus sent the Harpies,to snatch his food or splotch it with their droppings, so that Phineas would be  always hungry.He was relieved from this toremtn when the Argonauts passed through there and stopped for his  advice. The seer asked them to release him from the Harpies. So when the anthropomorphic birds showed up, the winged sons of Boreas,Calais and Zetes rose up through the group of the Argonauts, drew their swords from their sheaths and began to persecute the Harpies on the air. The fate of the two heroes required to catch the Harpies anyway,  elsewhy they  had to die, and vice versa Harpies would die only if were grabbed by,Calais and Zetes.Eventually there was a sort of compromise: One version says that the Harpies were chased by the two heroes until the Strofades(=turns). There, through the mediation of Iris as an emissary of the goddess Hera, spared their lives but promised to return to their cave in Diktys in Crete and not ever bother anymore Phineas. Another tradition claims that this promise was made only by Okypeti while Aellopous continued her flight until Peloponnese, where she drowned in the River,Tigris  which has named since then,"harpies."
The Harpies may originally have been a personification of a Cretan goddess of death, which portrayed her as a tornado. Among their  'tasks' refers to be the desire to surrender to the Erynies(=Furies), those who burdened with crimes that should be punished.
Tweet