Panas (ancient Pan) is an ancient Greek, virtual, anthropomorphic and secondary deity , which was intertwined with "panida(fauna)" of nature (humans and animals) in a two-way relationship of protection and personalization of genetic life force.
Combining human and animal factor, Pan was depicted having  animal legs, "goat-footed God," now a patron of farmers, hunters and fishermen with permanent residence in places of nature (mountains, forests, caves, valleys, ravines, etc. ). His cult received maximum growth parallel to that of Zeus and the other Gods throughout the Greek world and beyond.
In the main mythology of the ancient Greeks Pan was the son:


The myth of Pan 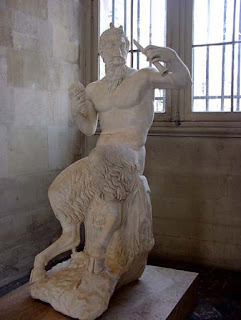 The appearance of Pan in Greek mythology seems to be estimated at  the 7th century BC. According to the prevailing traditions he was born on Mount Lykaion in Arcadia. But once he saw his mother leaving  him terrified of the form that he had two horns goat head, pointy ears, and he was bearded goat-footed. Hermes that saw the scene, rushed and protected the exhibitor Pan, whom conveyed to Olympus and where he was presented to Zeus and the other gods who welcomed him . He then returned and raised by the Arcadian nymphs, where he became a friend of Dionysus, and appeared more as a protector of farmers and pastoralists and their products, wine lovers and fun.
Panas was the companion of the nymphs and a tireless lover of any new or re-approaching young people that came close to his place,meaning the Nature. Patron of  goat proliferating,was soon considered himself a stallion even of those. He loved the natural life outdoors where he spent endless hours playing with his pastoral flute,syringe. It is said that the syringe (Latin: Syrinx) was also a Nymph,who in order to avoid Pan morphed into a stubble. Then Pan cut off  this reed  into lawlessness pieces which and joined in series and created his  flute.
The sexual adventures he had with various nymphs are many,the most important of which was the seduction of the Moon (idealized interpretation of New Moon)
Associated with Pan, is the legend that in the Battle of Marathon he helped the Greeks against the Persians,with loud and frightening voices echoing rhythmically his name "pan -pan- pan .... consistently Persians, listening those voices, seized by panic (a word derived from the name of Pan) and they retreated.


The worship of Pan

Naturally at the beginning Pan was worshiped in Arcadia on the Mount he was born as a shepherd and a secondary god, that's why Arcadia formerly  was called  Pania. In Lykaio was the oldest temple dedicated to Pan and the Moon. Later in Lykosoura created an important temple of Pan in which they were doing, as noted by Pausanias, and divination. Also in place Melpeia outside the temple of Pan found numerous pottery and bronze statuettes of the 6th and 5th centuries BC, probably as offerings. Gradually Pan, worshiped by fishermen,that's why he took the name "Pan over Aktion(Pan over the shores)" or "Pan Aktion",there were created coastal sanctuaries mainly fishing shelters of antiquity.
Also when the Athenians regarded Pan as an important factor in their victory over the Persians, Pan acquired and  polemical(war) divinity character. So many caves and hills in  Attica  got its name. Among them is the cave at the northwestern side of the Acropolis of Athens, another in Parnitha, third in Marathon and fourth Vari called "Cave Nymfoliptou or Archedimou." In all these reliefs are found Pan,Hermes and the Nymphs and many offerings one of which is the votive relief set forth in the Stoa of Attalos. Also Paneio term, Northeast Varis and the hill today the so-called "Pani(vail)" at Alimos was dedicated to Pan. Pan also worshiped in Aegina, Argos, in Psyttaleia, of Sicyon Troizina, in Oropos Megalopolis in Corycian, mostly Pianos Arcadia and the village took its name from the god. It should be noted here that the last-mentioned village there is the cave of Pan, which can be visited only on foot along the path, or as attributes inform us and  a "goat-road" through a path of unparalleled beauty (which starts from the village square) and to see on the rock  the form of the deity (looking at the cave entrance at the top-right diagonal). In the recent past, the cave was used by local shepherds who found there a shelter to protect themselves and their animals from the rain. The black color, might make an impression to the visitor, the walls of the cave comes from the fires set by shepherds to keep warm in winter.
However,the cult of Pan can be found also outside of Greece. Specifically, in the Egyptian city Chemmin, the "Panopoli" of ancient Greek,god Pan was identified with the god Min. And in Rome combined with Louperko in honor of whom they were the Lupercalia. Also in the Hellenistic period, the Stoic philosophers and the Orphic philosophers described Pan as god of "universe" (ex pan = all, universe) and ideal personification of Nature and its forces. In later years, Pan was considered as a  mortal demonic form. So with the advent of Christianity the form of Pan instead of the virtual form of outdoor life,was adopted as a distorted form of the Devil of Hell.

Pan in the Art

The god Pan holds a very important place in art. His sacred tree was the oak and Pityous (pine).His symbols are the syringe (the lumen) and the bezel. The sacrifices that were offered to him,included cows, rams and sheep milk and honey.
Important sculptors of antiquity took their subjects from Panama that Praxiteles and Zeuxis some of which are preserved in Roman copies. Feature is the cluster of Pan (1st picture) exposed at the National Archaeological Museum in Athens where Aphrodite threatens Pan with her sandal.
In modern times Pan continued  is an inspiration by artists such as sculptors FRAGAVILLA, Rodin and painters Romano, Rubens, Poussin and even Picasso
The asteroid 4450 Pan (4450 Pan), discovered in 1987, took its name from the God.