Persephone in Greek mythology was the daughter of the goddess Demeter. Her father was Zeus and her husband was Hades. She gave birth to Zagreus, the Eyboulos and Savazio. Hades took her down to the underworld because of her  beauty.But  the Goddess Demeter requested to bring her back. Hades agreed to let her live  six months Persephone at  the upper world and the next six months,at the underworld. So,the months that Persephone was at  the upper world,goddess Demeter was rejoiced and there was summer, while the other six months there was bad weather. The myth of the abduction first appears in Hesiod's Theogony. The Homeric Hymn to Demeter is the major source of our describes how she was taken from the Nucl field when the Maiden was picking flowers in a meadow with the bevy of virgin of  Okeadnidon nymphs , Athena and Artemis. And while she was picking a narcissus, the earth opened,  Hades sprang with his chariot and grabbed her. The cries for help were not heard from anyone, except Hecate and Helios(Sun). Zeus was away.

The myth of the abduction

The  natural  theory of vegetation and agricultural cycle. Firstly seen in antiquity by the S 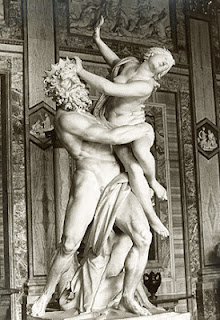 toics. The Maiden(Persephone) coincides with the grain and her absence with the underground containment.Her abduction is the allegory of the cycle of fertility of the nature: the cathode of Maiden to the underworld each autumn coincides with the absence of fruit, which emerge in the spring with her rise.But such an approach seems to be rejected because, as we are informed from our main source of the Homeric Hymn to Demeter, Persephone lived four months in the Underworld and eight months in the world above. But the  grains germinate just few weeks after sowing. Also the collection of flowers from Persephone or the wanderings of Demeter in search of her daughter can not be associated with agricultural operations
The anthropological dimension of myth. It focuses mainly on the human dimensions of myth: marriage and death-that is dominant in the myth-Traumatic separation of the mother from her young daughter, sadness and anger and ultimately reconciliation. There is also  a view  that says Hades should be considered "effete, sexually weak, while Persephone represents the erotic adventures of a teen"