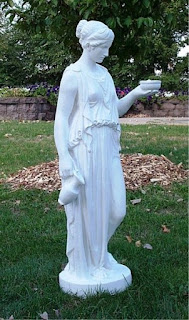 Hebe in Greek mythology is presented as a (minor) goddess of youth and vitality. She was the daughter of Zeus and Hera. According to a legend, Hera got pregnant to Hebe, when she was called by Apollo for lunch and she  had eaten wild lettuce.
Hebe was responsible to supply the gods with nectar and ambrosia. Ambrosia was the food that  maintained them forever  young. The duty of the supplier of the gods took Ganymede when the goddess married Hercules. Among her duties was the preparation and the chariot of Hera.
Hebe married Hercules when he ascended to Olympus as a demigod. So Hercules remained forever young. Together they had two children: Alexiaris and Anikitos(unbeatable). It is also said that his nephew Iolaus became young again with the help of Hebe after  Hercules himself begged her.
In Heraion of Argos, according to Pausanias,near the statue of Hera was a golden statue of the goddess Hebe,made by Nafkydous .
Tweet