The god of love,Eros in Greek mythology 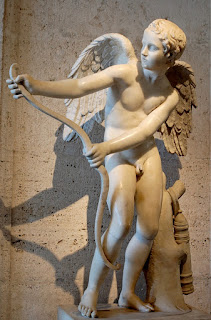 Eros in Greek mythology, love's longing personified, is regarded as Aphrodite's constant companion, and according to the later idea, as her son. In their train are found Peitho ( persuasion) and the Charites, to whom Aphrodite is otherwise closely related ; for in the Iliad Charis is the wife of Hephaestus, while according to the Odyssey Aphrodite herself occupies this position.
Eros, on the other hand, was the masculine representative of love. He was worshiped as a real god from
ancient times, probably even by the prehellenic population of Thespiae in Boeotia, Parion on the Hellespont,
and Leuctra in Laconia. At Thespiae he was worshiped under the very ancient symbol of a rough stone ; but he was there considered the son of Hermes, the dispenser of fruitfulness, and of the Artemis of the lower world (a goddess of earth's fruitfulness, much like Derneter and Persephone). In the Homeric poems, however, he does not yet 'appear as a divinity ; and Hesiod, though certainly acquainted with his actual worship, regards him only as a world-engendering primitive force. Himeros (Lat. Cupido), the longing of impetuous love, and Pothos, love's ardent desire, were after a while distinguished from Eros ; but they were not recognized as actual divinities. Thus there was gradually developed a plurality of Erotes not easily distinguished from each other. After the beginning of the fifth century B.C. Eros was represented in art as a winged boy or a youth of tender years, with a flower and a lyre, a fillet (taenid) and a garland in his hands, often in company with Aphrodite, who now was regarded as his mother. After the fourth
century B.C. he received as attributes a bow and arrow,and also a torch ; for love's smart which he inflicted was regarded as a wound. Still later, through a misunderstanding, the torch was supposed to symbolize the light of life, and Eros, like Aphrodite, was associated also with death and the lower world. The torch in his hand was reversed or extinguished, and sometimes he was represented as fatigued and just sinking down to sleep ; thus lie became practically identical with Thanatos, the god of death.Finally, the Platonic conception, that love both blesses and curses and torments the human soul, was expressed by
representing Eros as now flatteringly embracing, and again cruelly torturing Psyche (' soul '), who was pictured as a butterfly , or as a maiden with a butterfly's wings.
Tweet