Echo and Narcissus in Greek mythology 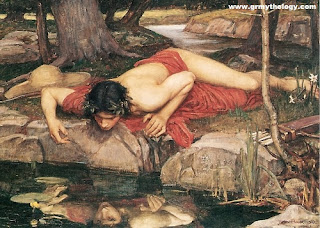 Echo was a nymph, a forest fairy,she was speaking endlessly and walked among the trees, laughing loudly.One day the goddess Hera was annoyed by the noise she was making and commanded her to be quiet, but she could not obey. Thus, when Hera discovered that apart from her chatter Echo was also telling to many lies,she got very angry.
Shaking her finger menacingly told her curtly "I am very angry with the noise you do. Henceforth,you  will not be able to talk anymore.
You will only be able to repeat what the others say." Echo opened her mouth to complain but she could not say anything. Could no longer speak at all.
"Now you are free to go",Hera commanded her."To go" repeated Echo.
Terrified she wandered in forests lonely and unhappy, since no longer anyone wanted to be her friend.
One day as she walked there, she met Narcisse. Echo hide behind some bushes to observer him better. The young man was so beautiful that she fell in love with him at first sight.
From that day she followed him everywhere, became his shadow. At first he did not gave importance, because he was used to girls to fall in love with him and had learned their antics. Sometime, however he got flustered, because wherever he went, he met Echo in front of him.
"Go away, i dont love you", he shouted. "I love you, i love you", repeated Echo. "Leave me alone", continued Narcissus. "Alone,alone", she replied.
Sad and unhappy,she wandered in the forests and as the time passed, she was getting weaker and paler. Nothing had left from the old Echo, except her voice, which was repeating only the words of the others.
Narcissus didn't even notice her absence even though he heard sometimes,her voice .Then the goddess Artemis decided to punish him for his cruelty and his arrogance. One day while he was sitting at the shore of a lake,the goddess made him bend over and look at himself. His face mirrored at the dark water of the lake, but he didn't realise that it was he, because never before he had looked in the mirror. And because he had not seen before such a beautiful face, he fell in love with it.
The days were passing and Narcissus could not take his eyes from his reflection, which was mirrored at the lake.

Neither he understood, because every time he was speaking, the lips of the other face were also moving. One day he tried to kiss his reflection, but once he touched the water, his image disappeared behind the playful wavelets.Once the water calmed , he saw his image again. Many times he requested his reflection to get out and love him as he did. But nothing ever happened.
Narcissus could not stand it anymore. And he was not used to be rejected,so one day being downhearted, commited suicide. There where his body fell, a beautiful,white and tall flower grew. That flower we call it Narcissus, and it always blooms in spring.