Bellerophon and the winged horse 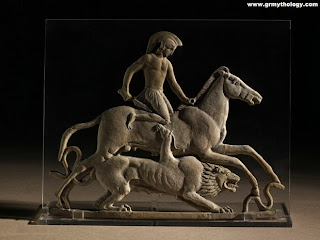 Bellerophon was a prince, who had been banished from his country and lived in the court of King Proetus. He was having a  well and good time, until the day the queen complained to her husband, that the young and charming prince had insulted her. The king, who did not know that this was a lie, got furious. At first he wanted to kill him, but then he thought if he hurt a guest, the gods would be angry with him and he would have terrible consequences.
Then he found another way to get rid of him. Asked  him to deliver a letter to the king of Lycia, Iobates. Bellerophon willingly accepted to go, without knowing what was within this letter, Proetus demanded Iobates to kill him.

When after a long and dangerous journey, Bellerophon arrived in Lycia, Iobates welcomed him very warmly. He  put aside the letter of  Proetus and remembered it after nine whole days. When he read it, realised that he also could not kill  Bellerophon.
He was his guest. Besides, in the meantime they became friends.
Then he thought to send him to face Chimera, a monster with lion's head, body of a goat and serpent's tail. "I need your help," said to Bellerophon. "Go, please, release my kingdom from the Chimera.It  kills my people and destroys their fields. None of the men i sent so far, could kill that monster.  I'm sure you will succeed."
However, inside him, he was confident that Chimaera would kill Bellerophon even before he could stretch his bow, as  it had killed all the others, .
The young prince, wanting to thank Iobates, while he was preparing to go to fight Chimera, he was approached by a wise old man. "If you want to kill this monster," he said, "You must ride Pegasus, the horse with the long white wings. Nobody until now was able to tame it."
Bellerophon did not know if he had to believe the words of the wise old man,so he was standing undecided, when was presented in front of him the goddess Athena. "Take these," she said, and put in his hand a pair of golden reins and disappeared before he could thank her.
One afternoonm,while it was getting dark, Bellerophon saw Pegasus drinking water in a creek. He approached it very carefully, passed the reins and hold it tight. The animal began to wheeze, started bouncing and kicking but could not escape.
When he finally calmed down, Bellerophon jumped spry on his back and Pegasus immediately opened his wings and was lifted into the air.
They began to fly all over the country, passing mountains and plains, lakes and rivers, until Bellerophon saw Chimera. He pulled the reins and Pegasus landed immediately.
Secured on the horse's back, Bellerophon dodged the fire that gushed from the mouth of the monster and the poison that dripped its tail. He stretched nippy his bow and shot an arrow at the side and one in the mouth. And the monster, Chimera, was instantly killed.
When Bellerophon turned back, everyone greeted him as a hero and Iobates to thank him, wed him with his daughter and gave them ​​as gifts many good estate. In subsequent years, he continued to be known for his brave acts and everyone worshiped and admired him, saying that he looked like a god.
He started  to believe it also, then he had an idea, because he looked like a god, to go and visit the gods. So he jumped on the back of Pegasus and flew to Olympus. But Zeus, the father of the gods became very angry with the arrogance of Bellerephon and he sent a gadfly which sting Pegasus, making ​​him go rampage and threw Bellerophon from his back. Certainly, Zeus saw him falling, but did nothing to help him. Bellerophon was not killed, only wounded. Alone now and unhappy, wandered the country without anybody paying him any attention at all. Who dared to approach someone, who had made Zeus so much angry?
Tweet