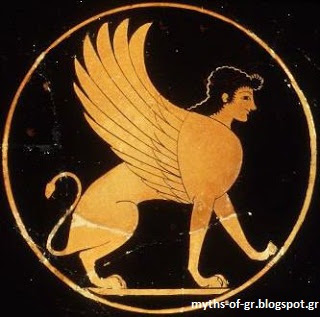 The Sphinx is a fantastic creature of Greek mythology, closely connected with the myth of Lavdakidon namely that of Oedipus. Representations of her are being used in secure areas,as symbols of protection in the Egyptian, Greek and Roman culture. According to Hesiod she was the daughter of Chimera and Orthros or by others of Echidna and Typhon. Echidna has also given birth to Cerberus, Orthros(Keeper of the herds of Geryon), the Nemean Lion, the Hydra and Fea of Krommyonas, also Chimera, the dragon of Colchis, the guardian of the Golden Fleece, the dragon who guarded the golden apples of Hesperides and the eagle of Prometheus.
In Greek representations the Sphinx is depicted as a winged lion with a woman's head (as opposed to the Sphinx of Egypt, not feathers) or as a woman with lion soles and torso,she had serpent tail and wings of a bird. Her name derives from the word clinch.

We can recognize the Sirens from the bird's body, human's head, feet and nails which are strong and thick and can be likened to the lions. This shows perhaps a relationship that can exist between Sirens and Sphinx. 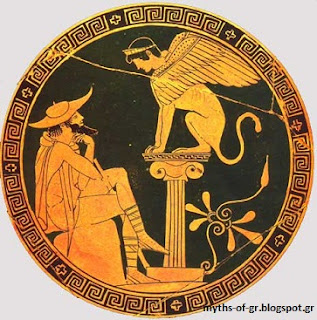 Hera and Ares sent her to her homeland, Ancient Thebes. There she stood and asked the passers "Which creature in the morning stands on all fours, at noon in two and three in the evening?". Anyone who would not solve the riddle, the Sphinx squeezed him until he died. Oedipus solved the riddle answering that the creature is the man since when is an infant walks on all fours, then lifted in both legs and walks upright in old age but uses  as a third leg a walking stick. Once Oedipus solved the riddle of the Sphinx,she shattered off the rock that she was standing and died.
There is also another version of the Sphinx in Greek mythology, which is presented by  Pausanias. So, according to Pausanias, she was the illegitimate daughter of Laios. Laios trusted only to her the oracle he got from Pythia and he told that it was about his wife Iokaste and her fertility. This is because Laios had many children from concubines, as he avoided commingling with Iokaste. But in one of his drunkenness he slept with his wife and  then Oedipus was born .

Thus, although he abandoned Oedipus on Cithaeron,he was keeping his reservations when one of his sons would claim the throne he sent him to Sphinx.So when she was asking the riddle,she could know if they were genuine children of Laios or not. Because only those who came from the royal family had the knowledge of the oracle ,so the ones who could not answer the riddle,were killed.
Oedipus before encountering the Sphinx had learned about this riddle in his sleep,so he was able to solve it.