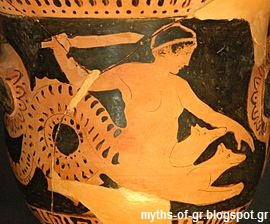 Scylla is a female monster of Greek mythology. Considered daughter of Poseidon and Gaia. She lived on the European shore of the Strait of Bosporus (the Asian coast lived another monster, the Charyvdis). Had six necks and grab corresponding sailors by passing ships. Later mythographers transferred the residence of the two monsters over the Strait of Messina between Italy and Sicily.


Both the Charybdis and Scylla involved in the legends of both Odysseus and the Argonauts, who went through those straits with few losses, because Hera asked Poseidon to sleep up, both she and Charybdis. She had nine heads that looked like a dog, hence her name. 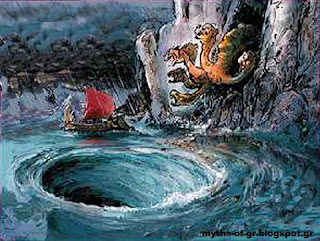 Scylla and Charybdis were two terrible sea monsters . The sailors who risked their travels by menacing waves and storms made up with their imagination mythical forms, raging angry and trying to destroy them. Thus were born these two scary monsters. The seamen were putting in their minds that it was not just the strong winds and the huge waves . They believed that something more was behind all this , a creature with evil soul and terrible in appearance, who seeks the loss thereof; cause this whole terrible turmoil and the weather was not accidental . It was said that Scylla and Charybdis were opposite to each other , in a narrow sea channel which, according to Homer , called Plagton Stones . This passage was quite impossible to traverse it, because of the terrible situation there by the presence of the two monsters - nor bird could fly and get away. There were many cliffs , very tall and the waves exploded on them with terrible noise. This narrow passage is placed in different places. Others say that it was at the Bosphorus , others at Cape Tainaro and others close to the Canary Islands , off the Mediterranean, viz. It was believed that Scylla and Charybdis lived on the Strait of Messina between Italy and Sicily . The two monsters were  in two reefs .

The one was so tall that the top was lost in the sky and was always covered with thick black clouds. The Scylla was hidden halfway down the precipice into the cave. She had twelve deformed legs, that rose in the air and six very long necks. The six heads were terrible, with three jaws each; namely every mouth had three rows of teeth, dripping poison. From the cave stood out her heads, which dived around the rock into the water and  grabed the great beasts of the sea, dolphins, sharks, seals and devoured them with rage.But they  also ate people if a ship dared to cross the strait. Scylla snatched so many rowers as many were her terrible mouths. Parents of Scylla were, according to tradition,  Forks and Kito, which had parents Pontus and Gaia. Children were also other the sea monsters like Echidna, the Sirens and Thoossa, which symbolized the fierce sea.Others, again, say that the parents of Scylla was the Phorbas and Hecate or Forks and Hecate.

Hecate was the daughter of Zeus, however,she was linked more with people than with the gods.Her kingdom was the sea , and when not hung around , stayed in the cave , just like her daughter , Scylla . Hecate was called otherwise and Lamia which was a beautiful queen of Libya , favored by Zeus.But, Hera , to take revenge , transformed her into a horrible monster, and later she gave birth to Scylla . Finally , another tradition holds as parents Tyfoea and Echidna . Charybdis lived on the opposite side , where there was a second hurdle , but with less height.On it had sprouted a wild fig and below the foliage was sitting the monster that his mouth vomited black water. The Charybdis could convert the narrow passage into a huge whirlpool; three times a day sucked the water three times xanavgaze with great speed. So if they happened and anyone was near the moments that sucked, had no chance to escape.

Not even Poseidon himself could intervene and help their his protege. The legend of Scylla and Charybdis created by the imagination and the stories of seafarers who believed that the terrible weather conditions were due to the existence of two horrible monsters.  Over time encountered  various stories about the original origin and their later transformation. As the years went by, people were trying to explain how they were born - They believed that they were firstly creatures on land and in the course of their lives for some reason,they  were transformed.
Tweet