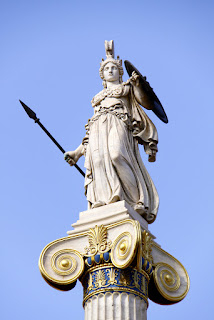 Athena, in Greek mythology, was the goddess of wisdom, strategy and war. Older types of the name of the goddess were the types Athan (Doric) and Athens, and the name Athena which  eventually prevailed, resulting from the adjective Athanaia.At the platonic Cratylus the name Athena derives from A-god-Noa or H-god-Noah, that means  the mind of God (Kratyl. 407b), but this explanation is not totaly correct.
Associated by the Etruscans with their goddess Menrva and later by the Romans as Minerva, symbolized by an owl, kept a shield of goatskin, called Aegis, which had been given to her  by her father and accompanied by the goddess Nike. Athena often helped heroes. She was armed, never as a child, always a virgin. The Parthenon in Athens is the most famous temple dedicated to her. Never had a partner or lover, although once Hephaestus tried and failed.

The birth of Athena
Athena was the favorite daughter of Zeus. Her mother was Metis, the first wife of Zeus. Zeus learned after prophecy that Metis would give birth to a child which would overturn the power of his father, so he had swallowed her while she was pregnant to Athena. Later, Zeus began to suffer from headaches and asked Hephaestus to help him. Then Hephaestus with a big hammer hit the head of Zeus and Athena popped out wearing armor, helmet and holding a shield. Seeing Zeus,she  threw everything to his legs, sample of  recognition as a supreme god. 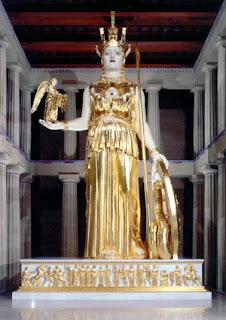 Athena as a goddess (and) of  the war was jacketed with Aegis, different from that of Zeus. In one version, Athena made he armor by the skin of Chimera , in another version, her armor was make of the skin of the monster Aegis or Aigientos, which destroyed everything in Libya, Egypt, Phrygia and Phoenicia, which Athena exterminated. Also the shield (and chest armor) of Athena was made by the head of Medusa. Medusa was a beautiful mortal and for this reason she was sieged by Neptune, but insulted  Athena by "polluting" a temple of her  by flirting inside  it. Then Athena transformed her into a monster so no man would besiege her again and her gaze would turn to stone anyone who looked at it. When Perseus killed Medusa, offered to the goddess's her head as thanksgiving gift, because thanks to the glossy shield she gave him, he was able to defeat Medusa by looking only at her idol .

City of Athens
Athena and Poseidon claimed the same city. So went the Acropolis and before the Athenians decided that whoever gave the most beautiful gift it would have the city. Poseidon struck the side of a cliff with his trident and immediately gushed a well. The people marveled, but the water was salty as the sea water, which overwhelms Neptune and was thus not very useful. Athena's gift was an olive tree, which was better, as provided to the city, food, oil and timber. Thus,Athena won the duel, ,and named the city of Athens.

Athena and Erichthonius
Athena had no love affair,she was  the symbol of eternal virginity. Only once Hephaestus tried to reach her out and was rammed into her arms. The goddess repelled his passion but Hephaestus  managed to leave his semen on her thigh. Athena full of disgust swept her leg with a piece of wool and threw it to the earth. From this piece, and the with the help of Gaia, was borned Erichthonius.

Athena and Arachne
A woman named Arachne, famous weaver, once bragged that she was superior in the art of weaving even from Athens herself, and challenged her to a duel. Athena in her tapestry depicted the conflict with Poseidon for Athens, while Arachne scoffed the love exploits of the gods of Olympus. Angry Athena for this insult to the gods tore the Arachne's weaving, Arachne not being able to endure the shame, hanged herself. Athena felt pity and loosened the noose from her neck, but she punished her by transforming Arachne in Arthropods spider.

Pallas
Maybe the nickname comes from the giant Pallas, whom Athena killed in fierce battle. In another version was nicknamed that because he was born from the head of Zeus shaking her spear.

Glafkopis
Often used by Homer. Has the meaning blue eyed (glaucous + ops). It is interesting that the owl , the sacred bird of Athena, comes from the same root, probably due to its own large and bright eyes.

Areia
The nickname that became the goddess Athena in the trial of Orestes in the Supreme Court for the murder of his mother, Clytemnestra. The critical vote in favor of Athena, Orestes was acquitted.

Ergane
They attributed this nickname, as she was the protector of artisans and crafts.

Virgo
With this epithet was worshiped in the temple of the Parthenon.

Promahos
With this name called Athena,when she was entering into battle ,fully armed .

Polias
This nickname was attributed to her ,as patron goddess of Athens and the Acropolis.
Tweet