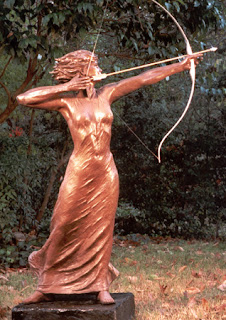 Artemis (in latin Diana) is one of the oldest, most complex and most interesting forms of the Greek pantheon. Daughter of Zeus and Leto, twin sister of Apollo, Queen of the mountains and forests, hunting goddess, protector of small children and animals.
Hestia, Athena and Artemis, were the only goddesses on whom Venus had no power  (which had subjugated all Gods and men).
Equivalent of Artemis in Roman mythology is Diana, while Etruscan deity Artoumes.

The birth of the peculiar goddess is placed at the island Ortygia. In this barren rocky island after terrible hardships and wanderings had fled the pregnant Leto to hide and protect  from persecutive fury of the lawful wife of Zeus, Hera. There, with the help of all female deities (except Hera) came to light Artemis and later her brother Apollo.
From the first hours of her birth Artemis was initiative. Although newborn infant, helps her exhausted mother to give birth to her second child, Apollo, and is identified in this way with Eilithia from ELEFTHO son, ie, grandchild, and so the goddess of childbirth. Beautiful and brilliant Artemis, had very early gained the appreciation of other gods. Since the age of three had specific requirements relating to the clothing, equipment and the sequence of her most favorite pastime, hunting. She was a child who knew what she wanted and really stable and rigid in her decisions.
Zeus  admired her for her perseverance and because of her versatility, he harbored great love and satisfied all her desires. One of the first things Artemis asked as a gift from her father was the eternal purity and virginity. Faithful and steady in what called and committed, the maiden goddess never besmirched her ethics, nor her character. Serious and proud, maintained her purity disregarding erotic sieges and assaults. Dedicated to hunting and nature, unconcerned about the joys of marriage and the pleasures of love. With enforcement and stringency demanded innocence and virginity not only of herself but of the Nymphs that surround it, and also those who with their services honored her. 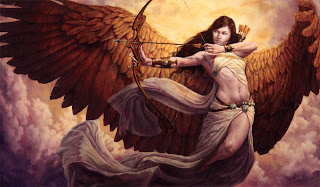 Artemis was a goddess relentless ever almost never forgave. Any wrongdoing against her, any deviation from her beliefs and principles deserved punishment. Her unrelenting fury was ready to erupt at any moment against the violator of her strict rules. Her deadliest arrows were continuously targeting  mortals, gods and heroes who ignored her existence or neglected her principles and her worship.
Once Aktaionas, the son of Autonoe and Aristaeus, happened to see Artemis naked, the time she was taking ​​her bath. The goddess feared of spreading  the incident, transformed him into a deer and put the fifty dogs that accompanied him to devour him. In another case Callisto, daughter of Lycaon (and one of the attendants of Artemis in hunting) was nearly killed by the arrows of the goddess because seduced by Zeus had lost her virginity and  got pregnant. Also Artemis killed Ariadne, because according to legend she was kidnapped and molested by Theseus on Naxos. Finally, the Orion, the son of Poseidon, he also found tragic death by the arrows of Artemis, because according to tradition he had mingle with the goddess of dawn Eos, or because according to another tradition had boasted that he was better than her in the  art of the bow.
Artemis had particularly fond for children and adolescents. Young men and women who maintained their innocence and who lived according to her principles, were always minions and were constantly under her protection. Hippolytus, indeed, had dedicated to it and worship, is a living example of this tactic and weakness of the goddess.

Hippolytus, was, a keen hunter and horse tamer, he had dedicated his life to the beautiful Artemis and the ideal that she believed in. No challenge, no woman it was not ever able to sets him adrift. Nor Phaedra, wife of Theseus, was able to charm to seduce him. His exemplary behavior made ​​the goddess to be touched and to spare him honors, and eternal glory-after his death-his memory name. Artemis was one of the most beautiful and most elegant goddesses of Olympus. The ancient Greeks really admired her. They imagined her  tall, with graceful beauty, imperious posture and walking proud.
Generally  goddess Artemis was  energetic, hard and restless. In most events appears conscious, mature and decisive, while a few were those events which show a completely different picture of her.
In the war of Gods, the proud and demanding daughter of Zeus appears as a small immature girl who had to obey, to respect and comply with the requirements of his wife's father and her brother. Faced with the reluctance of Apollo to duel with Poseidon, Artemis holds negative attitudes and faces her twin brother with  ironically words, insolent and contemptuous. Hera, saw this incident, enraged at the behavior and furiously started beating Artemis with her ​​own arrows.

One of the favorite occupations of Artemis was hunting. Female active, impetuous and agile, free and restless goddess channeled most of her energy in the search and tracking of prey in the mountains. Accompanied by cool and beautiful nymphs and surrounded by wild hounds running around the lakes, rivers, meadows and mountains to find mainly wild animals. Dressed in a simple light clothing and equipped with the appropriate equipment for the occasion she was thrown with excitement and fury in what mainly interested her. Untamed, brutal and imperious, excellent  literate of art of archery and very capable runner and hunter, served with passion in hunting.

One of the main features of Artemis was the universal domination of nature. Domestic and wild animals, fish the waters and birds in the air were all under her protection.

As goddess and protector of nature Artemis considered to be responsible for both agriculture and for husbandry. Areas that worshiped her and honored unfailingly always had fertile land, dotted fields, bountiful harvest and animals healthy and fertile. In contrast, many of the areas that did not comply properly with their obligations towards her and moreover disregarded her existence, had to face her vengeful rage and fury, which mean the destruction of crops and decimation of herds.

The punishment of Admetus
Admetus and Oineas faced  the wrath of the goddess because of their neglect and indifference that they showed. The Admetus in the wedding feast had forgotten to sacrifice (as required) to Artemis. Artemis angry by this irregularity sent to the bridal bed, a herd of snakes, while prepared to take his life. Apollo tried in vain to coax her. Eventually he persuaded the Fates to spare his life and in return get someone else's life from his own man. In this requirement of the Fates only his wife Alcestis is willing to be offered. ,however,at the last moment, the intervention of Hercules saves her  before her  soul  descended into Hades.

The punishment of Oineas
Oineas once had forgotten to sacrifice the patron of the city of Calydon, meaning Artemis. His ignorance costed to the city and its people. A huge boar sent by the goddess caused massive damage to land, animals and people. Nobody dared to kill him. The only one who dared was Meleager, the son of Eneas,he was finally the one who killed him, but later he was killed in a scuffle around the deal of the boar's meat. The wife and the mother of Meleager could not handle the grief of his death and suicide by their unhappiness. His sisters, that were weeping him incessantly, transformed by Artemis into fowls.

Artemis and Hercules
Apart from her participation in all of the above events, the goddess of the hunt takes an active part in one of the twelve labors of Hercules. Hercules for a long time hunted a beautiful doe with golden horns and bronze legs, ownership of the goddess Artemis. Artemis, with the assistance of her brother, Apollo, prevents him to kill the wild animal and urges him to deliver it in Tiryns to King Eurystheus. Upon receiving the animal Eurystheus undertakes to dedicate it again to the goddess. As in the myth of Hercules, and so many other incidents Artemis joins her brother Apollo in the reach of a perpose.In case of Niobi who  bragged (compared to Leto) on the many beautiful children she had,we have the cooperation of the two twins(Artemis and Apollo) in her punishment.Seven Arrows of Artemis and seven arrows of Apollo were nailed  to the  fourteen children of  Niobi and killed them. In exactly the same way and for the same reason Artemis killed once the Chioni (daughter Daidaliona and lover of Apollo)because she had boasted that her beauty surpassed even that of the beautiful goddess.

Artemis in the Trojan war
The war between Greeks and Trojans can not find Artemis disinterested. Along with her ​​brother Apollo, Ares, Venus and Leto actively involved with part of the Trojans. One of the first events that occurred even before the start of the war was due to the anger and wrath of Artemis. The Greek fleet because of the apnea(not windy) that had created by the goddess,could not start. A random incident  of the leader of the Achaean Agamemnon had caused this situation. Once without his noticing he  had invaded in a forest dedicated to Artemis and had killed a sacred deer. The goddess was angered so much that demanded the sacrifice of his daughter Iphigenia to favorable winds to help the Greek ships set sail.

The wounded Aeneas  by Diomedes, during the war had been  receiving help of Artemis and Leto and had succeeded thanks to them to regain his strength and return to battle.
The symbols of Artemis were many and varied. Ranged from animals and plants and resulted in weapons: goat, billy goat, deer, bear, dog, snake, laurel, palm, cypress, sword, quiver, javelin and more.
Tweet