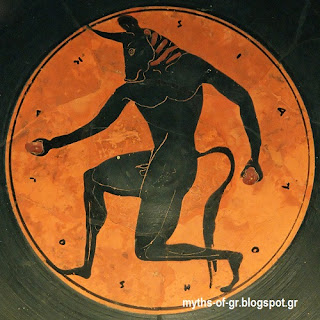 In Greek mythology, the Minotaur was a creature with a human body and head and tail of a bull. Beyond this descriptive name, the name of the Minotaur was Asterion(=stars). Sometimes even represented as a bull with human torso, in correspondence with the Centaur. He resided in the Labyrinth, a building built by Daedalus on the order of King Minos. The Minotaur was killed by Theseus.

The birth of Minotaur

Before  Minos became king he asked Poseidon a sign to show that he,and not his brother, had to ascend the throne.The god sent a beautiful white bull and told Minos to sacrifice this bull to him. But Minos instead of this he sacrificed another bull, hoping that Poseidon will not notice.
But the god  realized what he had done, was outraged, and made Minos' wife Pasiphae fall in love with the bull. The woman could not satisfy her passion and sought help from the engineer Daedalus.So he created a blank dummy cow in which Pasiphae went into it and the bull deceived,mated with her. From this union was born the Minotaur.
Minos, after an oracle that he took from the oracle of Delphi, asked Daedalus to build a building to be closed within the Minotaur, and he built the Labyrinth.

The end of Minotaur 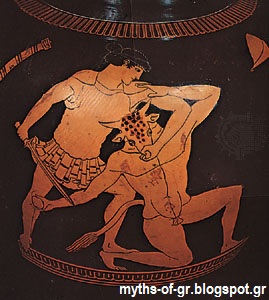 The son of Minos,Androgeos took part in competitions at Panathenaia and had some victories, for which the Athenians got jealous and killed him. Minos in order to punish the Athenians declared a war, in which he won. As punishment the Athenians appointed every nine years,seven young Athenians and seven youngster Athenians to be sent to Crete and mangled by the Minotaur.
Unable to tolerate the sacrifice, Theseus, son of King Aegeus of Athens, decided to be one of the fourteen young people, to be found near the Minotaur so he can kill him. When he arrived in Crete he met Minos' daughter Ariadne,and fell in love with her.Ariadne wanting to help him gave him a ball of thread, the Ariadne's thread and advised him to tie the edge to the entrance of the labyrinth and then to unravel it, so that then, after slaying the Minotaur, to find the exit.
Theseus actually killed the monster with his sword and using the Ariadne's thread, managed to get out of the maze and returned to Athens.