Theseus was a Greek king of Athens, in Greek mythology, son of Aegeus and Aethra, the most popular hero in ancient Greece after Hercules.

Once Hercules passed Trizina of Argolida where he was hosted in the palace of King Pittheas.When he sat down to eat, Hercules took the lion's skin and left it on the ground. A group of children watching the lion's skin frightened ran away. But a seven year old child, thinking he saw real lion grabbed an axe and lunged to kill it .He was Theseus, grandson of King Pitthea, one more hero of Greek mythology.

Because Aegeus had no children despite his efforts, he went to the Oracle of Delphi and got a tricky oracle. Returning to Athens he thought going through his friend,King of Trizina,Pittheus, who hosted him. Aegeus told him the oracle, so Pittheus comprehending its meaning,drunk Aegeus and threw him to the bed of his daughter Aethra, aiming thus to become the grandfather of  Crown Prince of the Athenian throne. At the morning, when Aegeus recovered from the hangover next to Aethra, persuaded her to promise him that if she would have his child,she would secretly grew him in the city. Also, hid his sandals and his sword under a large rock ,telling Aethra that when the child would be old enough to be able to lift the rock,to order it to go to Athens and show him the objects. Meanwhile, the night that she slept with Aegeus, Aethra saw in her dream the goddess Athena, which led her walking on reefs to pass on the islet Sferia, which is so close to the coast Trizina so can someone go by walking. As she walked into the sea is said that Poseidon impregnated her. So after nine months, Aethra gave birth to Theseus,on the road leading to the port.Therefore  the hero has uncertain authorship, shared between the Athenian king and the god of the sea.

The journey to Athens 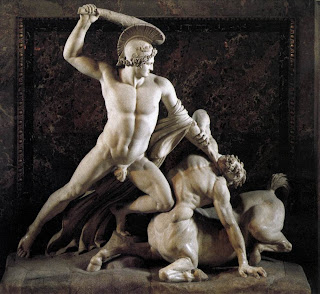 Theseus in the end of his teen age, learned from his mother, Aethra,his origin and he was able to lift the rock and find the things that Aegeus had hidden . Immediately he began his journey to go to Athens to meet his father, but not with a ship as his mother recommended. He wanted to go by land, which ravaged several bandits and somehow emulate the feats of Hercules, which was his model, but also to clear the way to Athens by the criminals.
Indeed, near Epidaurus he  met Perifiti known as "Koryniti" from the iron bat that he used to kill pedestrians. Theseus was able to grab it and kill him. Then,at the Isthmus of Corinth, he met Sinis the "Pityokampti" (= one who bends the pines) who was tearing apart his victims, by tying them between the two bent pine trees. Theseus killed him in the same way. In Skironides Stones, the current "Kakia Skala"(=wicked stairs), faced the bandit named Skironas,he was forcing the passersbys to wash his feet,and as they were hunched he kicked them and threw them off the cliff, where they were eaten by a giant turtle. Theseus threw him off the cliff. The hero moving to Eleusis, he fought with Kerkyonas,who was killing the passers drowning them with a strong embrace, Theseus killed him by hitting his head on the earth. Finally,at Kifisos he killed Polypimonas, father of Sinis, known as the "Procrustean" because he was cheating travelers and lured them into his home, where he smashed the legs or cut them with a saw so they can "suit" in his bed legs. After all this, Theseus received clearance from Fytalus sons at the waters of Kifisos, for the murders of all bandits,in order to face for the first time his father as a purged hero.

Without revealing who he is, Theseus appeared to his father as a stranger. However, Medea realized his identity and fearing that he would get the succession from her son, which she had acquired with Aegeus. For this reason,she convinced the king that he had to kill the stranger,so she made a poison based  in "Aconite" a deadly herb derived from the saliva of Cerberus. But at dinner Theseus drew his sword to cut the meat, so the father recognized the weapon he had hidden in Trizinia,legacy of his grandfather,Cecrops. Then Aegeus immediately intervened and saved his son from the poisoned food. Medea fled from Athens with her son Median. The brother of Aegeus,Pallantas and his sons tried to usurp the throne, but Theseus prevented them and confirmed the power of his father.

The bull of Marathon

The wild bull of Crete, conceived by Hercules during the seventh feat and which the coward Eurystheus had let free, had taken refuge in the surrounding area of ​​Marathon and wreaked havoc. Theseus went to look for him (some authors show the capture of the "Marathon Taurus' task commissioned Aegeus the hero before recognize him, believing that this way Theseus would be killed  ). On his way a storm caught him  and he took shelter in the hut of an old Ekali. She, wanting to please him because he had killed Kerkyona, whose victims were her two sons, hosting and promises sacrifice to Zeus if the hero returned unharmed from hunting. Upon his return , Ekali had already died, so the locals have taken to celebrate the sacrifice in honor of "Ekaleiou Zeus." In Marathon, the hero managed to capture alive the bull.He led him to Athens strapped by the horns,crossing the roads in front of the astonished Athenians,he went to the Acropolis and there he sacrificed the bull to the gods.

The mission for the Minotaur 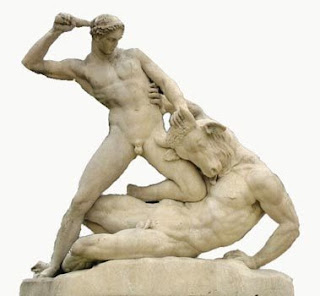 The most famous feat of Theseus was the killing of  the Minotaur. Minos,in order to punish the Athenians because they killed his son Androgeo, declared war in which he won. As punishment of the Athenians appointed every nine years seven young Athenian boys and seven young Athenian girls to be sent to Crete and mangled by the Minotaur in the Labyrinth. Theseus decided to set sail for Crete and put an end to the embarrassing contribution in blood.He took the place of one of the seven young and sailed with them from the Faliro at the begining of  month Mounychiona. In Salamina he chose as the captain of the ship the most capable Nafsithos,since then the Athenians had not yet deal with shipping.Arriving to Crete  he met Minos' daughter,Ariadne, and the two young people fall in love. Ariadne made ​​him promise to take her back home and marry her. Then gave him a ball of thread, the "Ariadne's Thread", so when Theseus entered the maze to unwind it,so after slaying the Minotaur,he can find the exit. Indeed, the hero anchored one end to the entrance of the labyrinthine building, searched, found and killed the monster, and rewinding the thread managed to get out of the Labyrinth. Taking advantage of the darkness of night, Theseus, Ariadne and the other young people escaped to the harbor and took their ship to the return trip.However,on the journey back,they made ​​a stop in Naxos.There, in the dream of Theseus,the god Dionysus appeared and told him he had to leave the island without Ariadne, as it was meant to stay there and become his wife. Ariadne stayed on Naxos and married the god Dionysus so developed her worship like a goddess on the island. Dionysus (or Venus or Hours) gifted her a gold crown, work of Hephaestus, and brought her to Olympus.So the mortal Ariadne  became immortal god's wife.There was also a needed stop on the sacred island of Delos to offer sacrifice to Apollo.

Prior to departure, Aegeus and Theseus had agreed that the latter would raise white sails if successfully complete the mission, otherwise his companions would leave the black sails with which they had departed,in order to show the mourning. But because maybe some curse Ariadne (Ariadne had abandoned on Naxos) nobody remembered to change the sails. Aegeus watching the ship arrive with black sails,committed suicide from Cape Sounion out of despair  falling down the cliff, thus giving the Aegean Sea its name. Of course, the logical version places elsewhere the point of observation, since it would be difficult for Aegeus to stay constantly for weeks in so far (for the season) point as Sounion having given up his royal duties waiting Theseus: thus, Aegeus was watching  the sea from the temple of Athena Nike on the Acropolis, where there was a tower. Seeing the ship to return with black sails, fell from the tower and died. Instead he fell Athenians founded a small namesake sacred Aegion, which recorded Pausanias climbing the Acropolis. Once Theseus returned to Athens, the Athenians celebrated the homecoming and his victory, that he deliverance them from the terrible tax, and immediately proclaimed him as king.

The death of Theseus

Later, Theseus left Athens and went to the island of Skyros. The king of the island, Likomidis, welcomed him initially, but after a while they supposedly went for a walk on the highest point and he pushed Theseus to the cliff. Theseus fell and was killed. According to another mythology, it was suicide. The Athenians remembered  him years later, when his children, Demophon and Akamas, took part in the Trojan War with Menestheas.