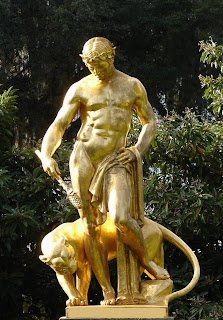 Dionysus (Lat. Bacchus) himself, the most important of the divinities of fruitfulness, was once represented in animal form, namely, that of a bull, richly endowed with procreative power, as is seen from certain
of the customs of his worship in Argos and Elis ; and at a later period the bull and the he-goat were still considered the most acceptable offerings to him. Nevertheless, the worship of Dionysus (' Zeus-man ? or ' Zeus-hero ') had its origin, properly speaking, in Thrace ; and from there, by an emigration of part of the inhabitants toward the southwest, it reached Phocis and Boeotia, and, later, Attica also. The Phocians w.ere closely related to the Phrygians of Asia Minor, among whom he was worshiped, under the name Sdbazius, as son of Ma, the mother of the gods.
In his native home, and later also in Greece, the worship of the god was celebrated by women, who
in sensual ecstasy, carrying torches, reveled by night through the mountain forests in so-called 'orgies/ a
word that is connected with greek "orgao"= (' to swell with fructifying moisture'). These devotees of his became in mythology sometimes his nurses, the nymphs, and sometimes his attendants, the Bacchae (' exulting ones '), Maenades (' raving ones '), and Thyiades (' raging ones ').To fill themselves (and typically, at the same time,
the rural districts represented by them) with new procreative power, they tore in pieces young animals (and,
in the earliest times, probably even children) which had been dedicated to the god, and which, according to
the older idea, filled his place. Then they drank the blood, which was regarded as the seat of vital strength,
devoured the raw flesh, and wrapped themselves in the fresh skin. At the same time with a loud voice they besought the god (whom at the time of the winter solstice fancy pictured as a sleeping child in a winnowing fan) to dispense fruitfulness in the year just beginning. The god was called also Bacchus or lacchus from the shouts uttered by them.
It was for the same purpose that in the rural districts of Attica the phallus was carried about during the
lesser Dionysia, which came at the same time in the year (Poseideon = December-January). In Athens itself, at the festival of the Anthesteria (' flower festival ?), this favor of the god was sought by the ceremony of his symbolic marriage with a queen representing the soil. In the times of the republic her place was filled by the wife of the ArcJwn Basileus.

As the bull and the he-goat, of all the animals,were especially sacred to Dionysus, so in the vegetable
kingdom were the evergreen ivy and the vine swelling with juice, on account of their luxuriant growth. The vine was especially appropriate also for the reason that the enjoyment of wine drinking has the faculty of increasing the sensual excitement peculiar to this worship to a point of enthusiasm that is like madness (drunkenness). (Of.i Spirit/'spirits of wine.') Such an effect, moreover, corresponded to the nature of Dionysus, who was so generally believed to be taken into oneself in drink that his relation to wine gradually drove into the background all other phases of his character.As Lyaeus ('freer from care ') he carries for a symbol the vine branch or the tliyrsus (vine-prop). In his honor was celebrated at Athens the vintage festival of the Oschophoria (' carrying about of vines'), as well as the Lenaea (' feast of the wine press'); while the island of Naxos, which abounded in wines, and was the center of the worship of Dionysus among the islands having an Ionian population, the ditliyrambus was probably first sung. This' was originally a simple drinking song in honor of the god, which in Corinth became a chorus rendered by singers in the costume of Satyrs. From this was developed the dithyramb of Pindar at the festivals of Dionysus in Thebes. In Athens, however, it became the drama, at first in the form of ( tragedy= ' goat song') or satyr-play. Here, at the spring games of the greater Dionysia, the presentation of the dramas that grew out of the dithyramb came at length to constitute the most essential part of the festival.When the real significance of the above-mentioned
sacrifice of children was no longer understood, the Orphic poets, i.e. the representatives of the religious poetry developed by the worship of Dionysus, about the time of Pisistratus, attempted to explain that sacrificial custom by inventing the story that Dionysus himself, when a child, or in animal form, had been torn in pieces by the Titans, and had therefore received the name Zagreus.There was, however, symbolized in that fable an idea based  an actual process of nature ; for Dionysus really seemed to die in the fall. As the reproductive power of nature vanishes after the harvest time for a season, so its awakening in the spring, which in Athens was celebrated by the Anthesteria (' flower festival '), could be looked upon as a resurrection of the fructifying god, and thus he could easily be regarded as having been temporarily dead. This was the case particularly at Delphi, and probably also in the 'mysteries' of Eleusis. 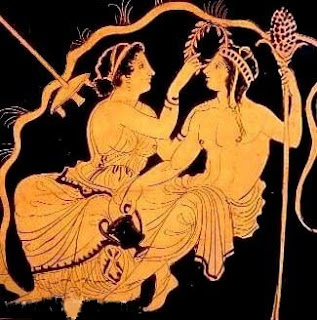 The legend of the marriage of Dionysus with Ariadne, a Cretan goddess very much like Aphrodite,which was localized on the island of Naxos (Dia) near Crete, is entirely in harmony with the nature of the fructifying god; and the significance of this wedlock is indicated by the names of their sons, Oenopion (' wine drinker '), Staphylus (' grape-cluster '), and Euanthes(' the richly blooming '). He is, however, associated with Aphrodite as the father of Priapus, god of gardens and flocks, who was worshiped at Lampsacus on the
Hellespont and was essentially like his father The oldest symbol of the worship of Dionysus is a consecrated post or pillar (the idea of which probably arose from a sacred tree) ; and from this, by the addition of a mask and clothing, the oldest regular images naturally developed. The type of the god in which he is bearded and fully clothed was the prevalent one till sometime during the fourth century B.C. ; later he appeared as a child on the arm of Hermes or of a bearded Satyr. After Praxiteles represented him as a youth nearly nude, clothed only with a skin of a fawn, the nude and youthful form came to be universally accepted.
Tweet